The information in the Guide to Posterior Implants provides a comprehensive explanation of the consequences of missing teeth, a comparison of dental implants and bridges, and a detailed description of posterior implant procedures. We encourage you to review all of the pages to help you make an informed decision about your treatment options.

It is estimated that 70% of the population in the United States is missing at least one tooth. The first permanent teeth to erupt into the mouth are the 6-year molars and these are often the first teeth to be lost as a result of decay, multiple restorations over time, fracture, or failed root canal therapy. Teeth that have been treated multiple times eventually fail due to recurrent decay, infection, or fracture and will usually be removed as a result of these complications. This is the leading cause of single posterior tooth loss for adults.

Most people would agree that replacing a front tooth is important, for esthetic reasons and because it is considered socially unacceptable to have a visible missing tooth. Yet many people who are missing posterior teeth are not as motivated to replace them since these teeth are hidden from sight. The obvious function of posterior teeth is chewing, but they also affect the overall bite and take some of the pressure off the front teeth that is created by chewing. This function is undermined when a tooth is lost.

In addition, there are a number of other problems associated with a missing posterior tooth, including the following: 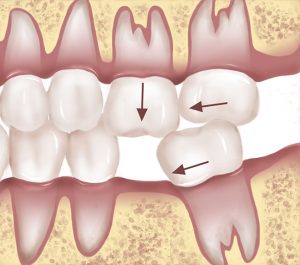